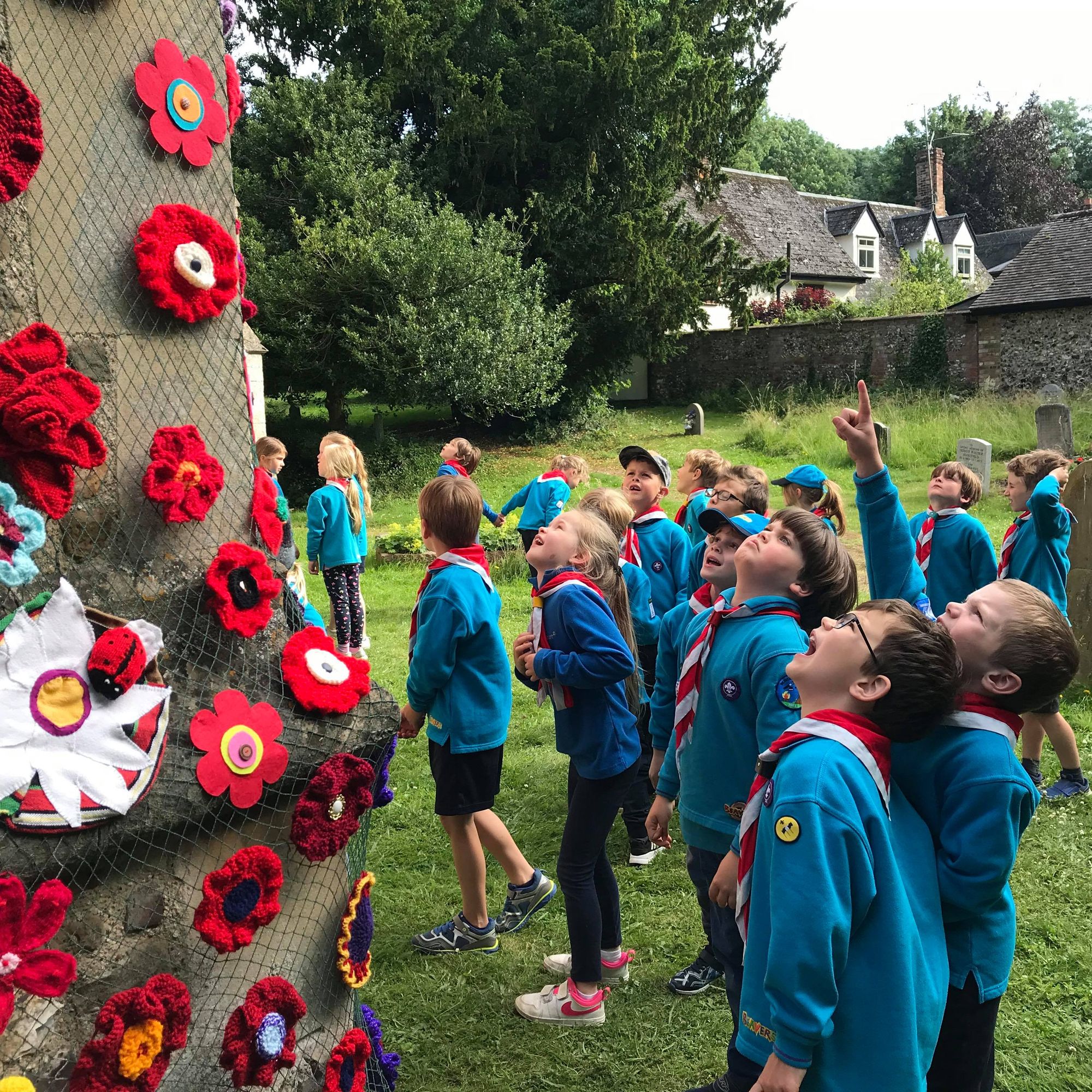 In the photo above, local beavers pointing fingers at the flowers they made for the Flower Tower (Carol Robinson)

Since the Barley Flower Tower was hoisted into position last month, its fame has spread far and wide.

Visitors have come from Hertfordshire, Bedfordshire and Cambridgeshire to see the 1,452 home-made flowers draped over the 15-meter spire of St Margaret of Antioch Church in Barley, near Royston, Hertfordshire.

Articles on the Barley Flower Tower have featured in local and national press, diocesan publications and on BBC Three Counties Radio, and more are expected in Knit Now and Simply Knitting magazines.

As a result, pubs have seen an increase in visitor numbers, said Flower Tower designer Alison White, who said other churches across the country have sought advice on how to create theirs.

Local beavers visited the church to see their work and participate in a special outdoor Sunday church service to bless the Flower Tower, which was well attended by the village.

A pop-up Pimm’s and cocktail party were held next to the Flower Tower earlier this month, which spurred fundraising efforts.

“We got off to a good start in our fundraising to modernize the interior of the church by improving access for people with disabilities, building a kitchen and restrooms,” Alison continued.

“If the Barley Flower Tower made you smile, please donate. “

A Photographer of the Year competition was also launched. Anyone who has taken pictures of the tower can share them on the Barley Flower Tower Facebook page.

The winner will be the photo that receives the most likes by September 1.

An art exhibition will be held at the church next month when the Artist of the Year is chosen. All photos must include all or part of the tower.

Afternoon tea is also planned and will provide an opportunity for local clubs, groups and charities to have a booth to boost their own fundraising efforts.

Alison added, “If you haven’t visited the Barley Flower Tower yet, it will be on display until the end of September. It is a great place to bring children and grandchildren during school holidays and they can play counting bees and butterflies on the tower.

“We hope you come away with a big smile on your face too.”

To donate, click here or go to the fundraiser at The Barley Boutique, The Checkers Pub or The Fox and Hounds.

SSee the latest news, information, conversations and more, all tailored to your neighborhood, in your InYourArea live stream here.

The Sunday Assembly hopes to organize an ungodly future. It is not easy.