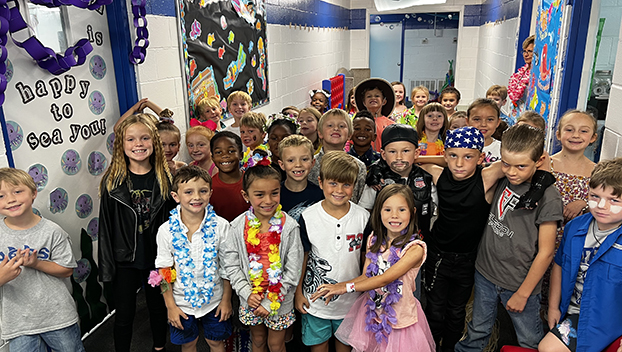 Vidalia High School’s reunion schedule for this week is packed with a variety of fun themes, one on one, to dress up the students to compete for the best look.

Monday was Athletes vs. Mathletes, Tuesday was DC vs. Marvel Comics, Wednesday was Country vs. Classic, Thursday was Disney vs. Nickelodeon, and Friday is Viking Spirit Day with everyone sporting their white and blue.

A viking pep rally is scheduled for Friday morning at 9 a.m. followed by a return home parade at 2 p.m. before the big match against General Trass on Friday evening at 7 p.m.

Delta Charter School is heading into game day with some tropical dress-up themes, more wacky this week. Monday was â€œUnder the Seaâ€ day at Delta Charter, where students were allowed to dress like anything from pirates to mermaids to sea creatures. On Tuesday, they wore fan kits for their favorite team, from high school to the major leagues, as the middle schoolers celebrated a cheering rally Tuesday morning at 9 a.m. before the game at 5:30 a.m.

Wednesday was wacky with matching clothes, crazy hair, and all the other dress-up shenanigans students and teachers could imagine. Thursday was like a tropical vacation with a Hawaiian theme with grassy skirts and poses.

On Friday, students and teachers will show off their team spirit dressed in school colors ahead of the big return match against the island of Sicily, which starts at 7 p.m.

The high school cheer rally begins at 9 a.m. Friday with a return parade right after.

Monday was western and camouflage day for elementary school students at the cathedral. For high school and junior high school students, the slogan was â€œWinning is as Easy as ABCâ€. Each grade level from sixth to 12the rank has been assigned a letter of the alphabet and could disguise itself as something that begins with that letter.

Tuesday was swimsuit day and Wednesday was pajama day for all grade levels and elementary students shone bright for Neon Day on Thursday while middle school and college kids dressed up as teenagers from different decades, 1950s to 2000s for their “Game of the Century” theme.

Friday, of course, is Spirits Day in preparation for Friday night’s second leg against the Copiah Academy. The reunion court will begin its traditional parade around the pitch in convertibles one hour before match time at 7:30 am.

At Adams County Christian School, students celebrated Reunion Week with 1950s outfit on Monday and dressing like their favorite teachers on Tuesday. Wednesday was also pajama day at AC and Thursday was all leather and hula skirts with a biker and beach goer theme.

On Friday, students mingle with crazy socks and Rebel Spirit gear ahead of their 7pm return match against Silliman

The school also invites CASC alumni to celebrate with them at a pre-game party, which begins at 4 p.m. Friday on Chinquapin Lane. Those planning to attend can confirm their attendance at [email protected]