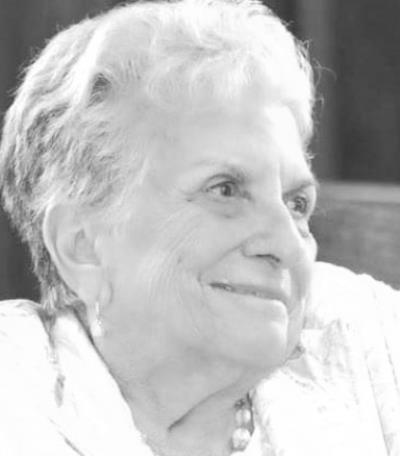 Martha Dean Adams Wood, wife, mother, grandmother, great-grandmother, sister and loving friend, left this world on September 12, 2021, at the age of 91, at peace at her home in Weatherford. Born to Erna and Maud Adams, of Cerro Gordo, Illinois, on October 18, 1929, she was three months premature (weighing just 1 pound, 8 ounces) and was incubated on the stove oven door.

In 1949, she met her husband Marvin Lloyd Wood, of Eau Galle, Wis., At a USO ball in Chanute, Illinois, where he said that night that she was the daughter he was going to marry. The course of his life was mapped out. They married six weeks later and have been together for 71 years. They had four children, Katherine, Joyce, Marvin and David. Martha was a clarinetist and loved the music of Artie Shaw and the religious songs sung by Elvis Presley. She loved her family in Cerro Gordo but ventured into the world as a military wife at the age of 20 and never looked back. We hold him up as a living example of grace. From the circumstances of her birth to the health issues of some of her children to dealing with her own health issues, they all stood by her example, never complaining and always making the most of things as they gave her. were presented. Who could ask for a better model? Martha joined her siblings, Frances Adams, Robert Adams, Mary Adams, and Marcia Adams Miller. Martha is survived by her loving husband of 71 years, Marvin Lloyd Wood; her children, Katherine Goodman, Joyce (Danny) Griffiths, Marvin (Hye Kyong) Wood and David (Patsy) Wood; grandchildren, Heather Kowis (Bryon) of New Caney, Carolyn Basinger (Shawn) of Colorado Springs, Colorado, Alex Gordy (Jennifer) of Denver, Colorado, David Wood Jr. (Tiphanie) of Norman, Oklahoma, Henry Wood (Lindsey) ) of Weatherford, Hollie Wood of Weatherford, Amanda Dulaney (Jake) of Graham, Marvin Wood III (Abby) of Seattle, Washington, James Wood of Weatherford, Michael Wood of Sacheon, Republic of South Korea, and Tyler (Alex) Davis of Weatherford; great-grandchildren, Alan Rock, Layne and Levi Kowis, Ethan and Luke Basinger, Anastasia and Isabella and John Griffiths, Rafal Zawiazalec, Chloe Wood, Bentley and Justin Dulaney, Kimberlyn Wood, Preston and Emma Thomas. A longtime member of the Taylor United Christian Church, she cherished and received her sustenance from her faith, friends, and many other family members who will be sorely missed. A big thank you to the family and friends who took part in “taking her home”. Whether you are with her in person or through thoughts and prayers, it is greatly appreciated. Final arrangements were made with White’s Funeral Home in Weatherford and Martha’s wish was not to have a funeral service but that everyone who knew her will remember a moment with her that makes them smile. With the family spread around the world, a celebration of life will take place at a future date. Martha was a staunch supporter of Marion Medical Mission whose mission is to provide freshwater wells to villages in Africa. Donations, in lieu of flowers, can be made to Marion Medical Mission (www.mmmwater.org), Smile Train (www.smiletrain.org) or St. Jude (www.stjude.org) on ​​Martha’s behalf.

Most Admired Companies in 2021: Isagenix International