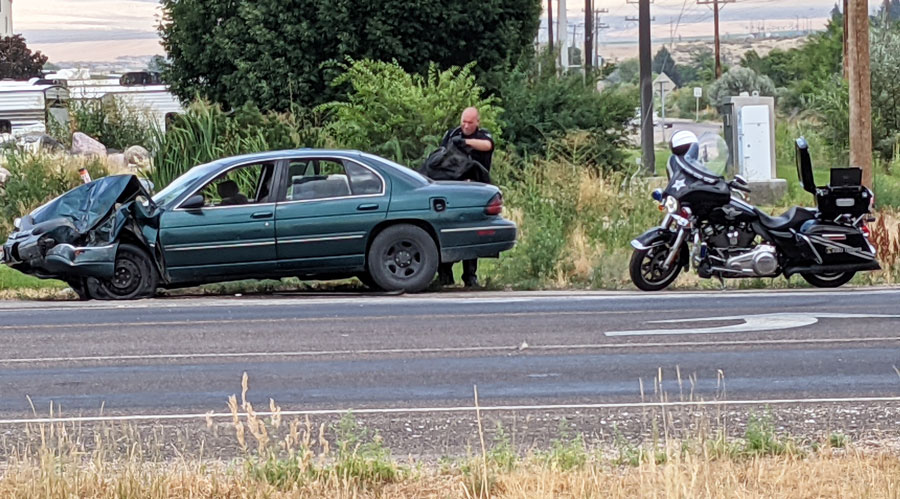 An ISP agent searches the vehicle run over by Daylon Preacher during a high-speed chase in Chubbuck on July 20, 2021. | Kalama Hines, EastIdahoNews.com

CHUBBUCK – A Fort Hall man was arrested Tuesday night after leading law enforcement in a high-speed chase and striking an Idaho State Police soldier with his vehicle.

Daylon Jon Preacher, 29, was arrested around 5:30 p.m. after the car chase and foot manhunt near Bicentennial Park in Chubbuck, according to an FAI press release.

The incident began when the ISP called a traffic stop around 4:15 p.m. near the intersection of Yellowstone Avenue and Chubbuck Road, the statement said. The driver, later identified as Preacher, gave officers a false identity and did not obey orders.

One of the two passengers got out of the vehicle. Next, Preacher backed up the 1998 Chevrolet Lumina which he was driving in the ISP cruiser, hitting the soldier. He then fled the scene north on Yellowstone Avenue at high speed with law enforcement in pursuit.

Preacher crashed the Lumina into a 2006 Jeep Liberty at the intersection of Yellowstone Avenue and Siphon Road, disabling the vehicle. He abandoned the car and fled on foot to the Gate City Christian Church. The soldiers tracked him down soon after, with help from the Chubbuck Police Department and the Bannock County Sheriff’s Office.

Once found, Preacher was rushed to hospital for medical treatment and then taken to Bannock County Jail. He was sentenced to an arrest warrant for felony and for evading agents.

The investigation is ongoing, the statement said. Additional charges are pending.

Pew sees increase in Trump-era ‘evangelical’ label – and yes, they…